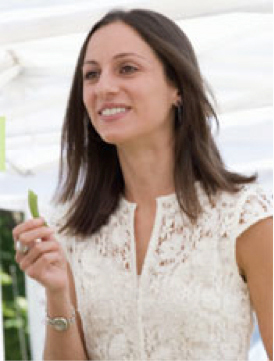 Aug. 8, 1995: I remember the date of my first colonoscopy clearly. On that day the cause of my five years of mysterious pain and suffering finally was revealed—in images of my intestinal walls broadcast on a small TV screen. At 18, I was now officially diagnosed with Crohn’s disease—a chronic condition of unknown origin that causes ulceration and inflammation of the large and small intestines.

The diagnosis, while certainly not good news, was actually a relief. Now that my disease had a name, I thought I could finally be cured. After a half decade of suffering, I clearly was ready for that one magic pill that would “fix” me. The tearing pains in my abdomen would soon be gone, I would be able to eat without fear and eventually feel strong, energetic and healthy again.

I was convinced I was on the road to recovery. And I was. But it was a very different path than I originally imagined.

As is common with Crohn’s disease, the conventional treatment my doctors initially prescribed after my diagnosis included a combination of anti-inflammatories, muscle relaxants and steroids. I was told that my 85-pound body required 28 pharmaceutical pills a day to heal its intestinal wounds and relax my fitful insides.

However, instead of improving once I began these medications, my condition seemed to worsen. I couldn’t eat without getting sick. I couldn’t get through a day without pain. I was exhausted. My colon often hurt so much and was so cramped that I couldn’t stand up straight. I felt like my body was toxic, which I now know it probably was.

For the next two years, I continued to see doctors, often complaining about how awful I felt from the medications. But I still was willing to do and try anything they prescribed. What they offered was more medicine.

First, they told me to increase the dosages of my current medications. (Wasn’t nearly 200 pills a week enough?) Next, when higher doses provided no relief, I was given different medications to try. I was even enrolled in medical trials using drugs that were not yet approved by the Food and Drug Administration because I had exhausted all the approved drug options that were available to me at the time. In short, I was trying everything that modern medicine had to offer me, and my pain persisted. My intestine was so weak that I developed a fissure (a tear in my colon) and had to have surgery to remove the diseased area. When I returned to one of my doctors, desperately searching for another solution, he reviewed the results of my most recent colonoscopy and congratulated me for being “in remission” since there were no active ulcerations present in my colon at the time. In tears, I asked him why I was still having constant diarrhea and why my body always felt shaky. His solution? A prescription for the antidepressant Prozac. Although I dutifully filled the prescription and took one pill, I quickly rebelled. I wasn’t depressed—I was sick! There had to be a better way to wellness.

I continued to be at a loss as to why I was not well when I was listening to and following directions so closely—until I finally realized that I was listening to the wrong people. My doctors were drowning out the voice inside me that kept suggesting I may not be on a path to wellness.

I often say that changing my diet was my last-ditch effort to save my life. I had repeatedly asked my doctors about nutrition and was told it was not important. They said my symptoms were due to “the poor state of my digestive system” and that food had no effect on that.

So, I researched nutrition myself. I had to do something, and clearly what I had been doing wasn’t working. In my research, I turned to the one book I could find on Crohn’s disease, Breaking The Vicious Cycle: Intestinal Health Through Diet, by Elaine Gottschall (Kirkton Press, 1994). Although her diet didn’t “cure” me, it gave me energy and a sense of wellness that I hadn’t had for years. It also helped me realize I hadn’t been eating healthy foods—so much of my diet had been processed and refined up to that point.

I began to listen to my body. I monitored which foods made me feel better and which made me feel worse. I began to nourish my body with healthy organic foods, trusting that what my body absorbed would help me heal. I incorporated whole foods into my diet. I ate an abundance of cooked, fresh vegetables that were easy to digest. I made tonic soups of carrots, yams, parsnips, yucca, ginger and miso. I began eating lots of leafy green vegetables. For lunch I sautéed kale, collards, bok choy or spinach. I even ate whole grains, which I always thought were too abrasive for my system. Oats, millet, buckwheat and brown rice became staples in my diet, replacing the white toast, bagels and pasta I originally thought were easy on my body. I became a tea guru. I drank peppermint, chamomile, ginger, fennel and licorice teas to soothe my intestinal tract. I also drank pau de arco, dandelion root, rooibos and green teas to provide my body with antioxidants and help cleanse my liver of all the residue from the medications I was still taking. I made fresh juices of carrots, ginger, cucumber, apple, aloe and chlorella. I limited my intake of meats, dairy and sugars and started taking flax oil and a probiotic supplement to replenish the good bacteria that prolonged medication use depletes. Within months, I began to feel stronger. I gained weight and had energy. My digestion began to improve.

I went back to my doctor with the story of my success. I couldn’t wait to tell him that I was ready to stop my medicines. I still remember how he looked me in the face and explained how I needed to be on the drugs for the rest of my life. I argued with him, telling him I wanted to slowly wean myself off them. Taking my hands in his, he assured me that without the medications I would be in the hospital having another piece of my intestines removed within three months.

This time, I didn’t listen. I knew I had to do it my way. I devised my own plan and gradually weaned myself off of every drug I was taking. As I discontinued each of them, I felt an increased sense of independence along with a sense of power. I no longer had to rely on anything external to keep me well. I now possessed the tools to heal my own body.

Today, a decade after my diagnosis, I’m happy to say I’ve been managing my health without prescription drugs for close to seven years. I look and feel healthy. I have faith in my body’s ability to heal itself. Although my digestive system remains my body’s “barometer”—if I’m getting a cold or working too hard, I feel it in my gut first—I really don’t have symptoms as long as I pay attention to those signals and take care of myself. I have confidence that with proper nourishment my digestive problems will eventually be gone for good.

As much as I’ve suffered, my experiences have led me to a greater wisdom about and appreciation for life and health. In fact, in 2000 I went to graduate school for nutrition, and I am now a certified holistic health counselor with my own nutritional consulting business. I consult with clients and teach natural foods cooking classes. I’ve found that I love working with others and seeing their lives and health improve. Good nutrition is really so simple. Plus, it’s a lot tastier than 28 pills a day.

Debbie Sarfati is a certified holistic health counselor and owner of Whole Nourishment in Boulder, Colo.