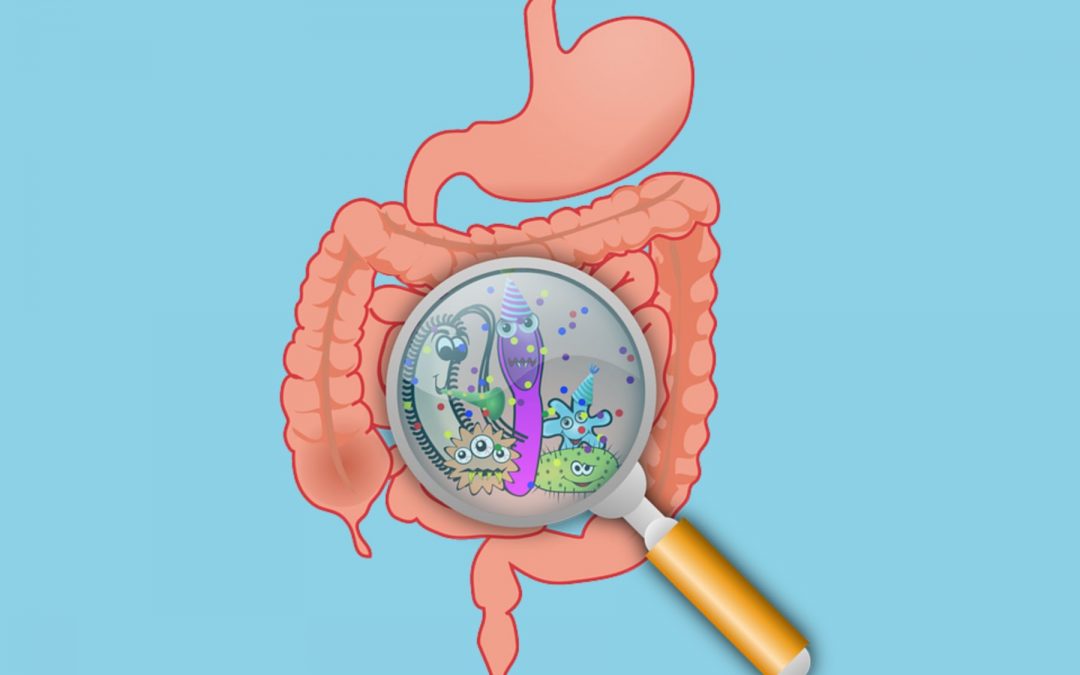 Small Intestine Bacterial Overgrowth (SIBO) is an accumulation of bacteria in the small intestine. It is believed that the overgrown bacteria may be from bacteria that normally live in the gastrointestinal tract, but have abnormally overgrown in an inappropriate location. While our large bowel is teeming with bacteria, the small bowel should contain much fewer bacteria, relatively.

This small bowel bacterial overgrowth can interfere with our normal digestion and absorption of food and can cause damage to the lining or intestinal membrane (leaky gut syndrome).

The main symptoms of SIBO are those of Irritable Bowel Syndrome (IBS). SIBO has been shown to exist in up to 84% of IBS patients and is therefore theorized to be a significant underlying cause. The gastrointestinal symptoms of SIBO may typically involve bloating, gas, burping, abdominal discomfort, constipation and/or diarrhea, heartburn, and nausea.

Treatment using an Elemental Diet ranges from 2 to 3 weeks and is 80 – 85% effective in eradicating bacterial overgrowth. This is considered a VERY effective treatment—and far surpasses antibiotic success rates!

A course of antibiotics or herbal antimicrobials typically decreases bacterial overgrowth by about 30 ppm in a 2-3 week period. Allison Siebecker has seen an Elemental Diet decrease bacteria by 150 ppm in a 2-week course! We have seen similar results in our office, as I will illustrate below.

Choosing an Elemental Diet can:

Patients follow a 1-day prep diet before the test, eliminating certain foods that would feed the small intestinal bacteria. After the first baseline breath sample is taken, patients drink a sugar solution of lactulose (food for bacteria) and proceeds with breath testing, every 15 or 20 minutes for the next 2 or 3 hours. If bacteria are present to consume the lactulose, hydrogen and/or methane gasses will be their byproduct.

*since the original writing of this post, a third gas – hydrogen sulfide (H2S) – can now be tested

If gas levels above a certain threshold (20 ppm for hydrogen or 10 ppm for methane) are detected, you can presume that bacteria are present in small bowel. To test positive for SIBO, these spikes in gas levels will be seen in the first 90-minutes of testing, when the lactulose is presumed to be in the small bowel. After 90-minutes, the lactulose should have reached the colon.

Please note: until recently 120 minutes was considered the cutoff, as you will see in some of the older test results below. There are also other subtleties to accurately interpreting SIBO test results, but I am keeping it very basic for the purpose of this post.

This client is a perfect example of recalcitrant SIBO and very high hydrogen gas levels. In his first test, his hydrogen gas levels were above 20 ppm at 60 minutes and continued to rise to 133 ppm by 120 minutes (the cutoff time being used in 2017). 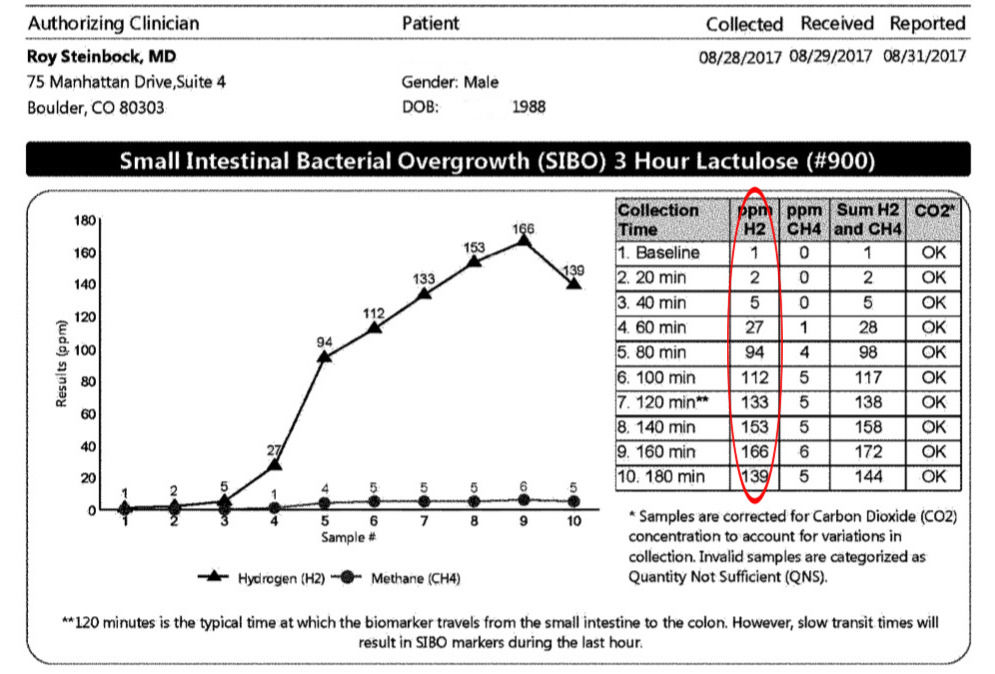 This second test was done after a low sugar/carbohydrate diet and two rounds of herbs (about 4-6 weeks each) as well as a 2-week course of the antibiotic of choice for SIBO, Rifaximin. As you can see, at 60, 75, and 90 minutes his gas levels still remain significantly greater (31 – 147 ppm) than the 20 ppm we would call “negative” and his symptoms persisted. 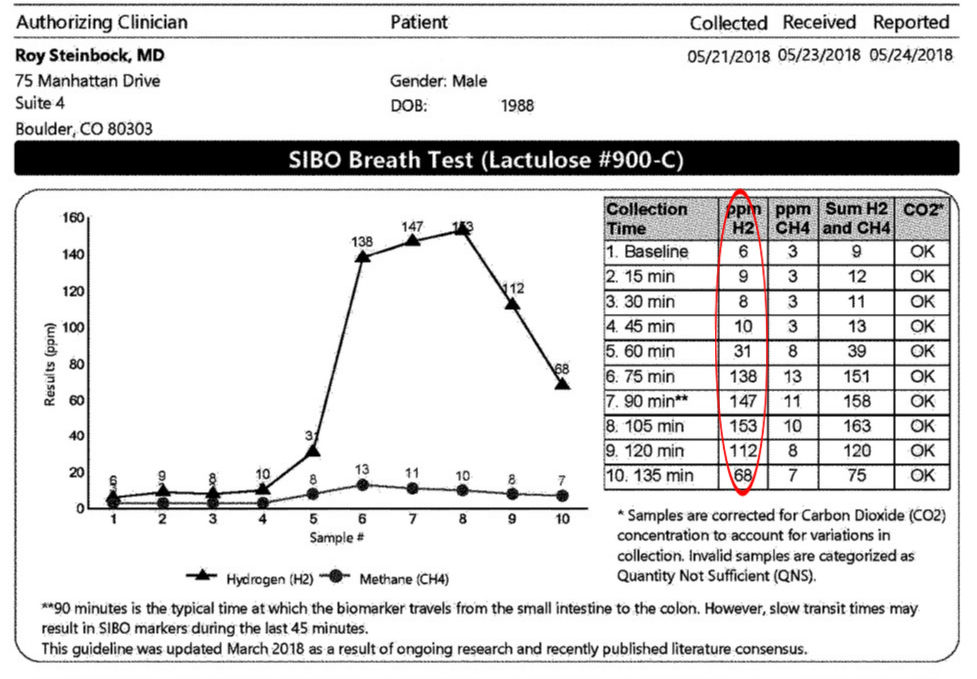 This last test was completed after I led this client through a 2-week Elemental Diet. As you can see, his SIBO was eradicated entirely! Now in the first 90 minutes, his gas levels peak at only 6 ppm (again, “negative” is below 20 ppm). 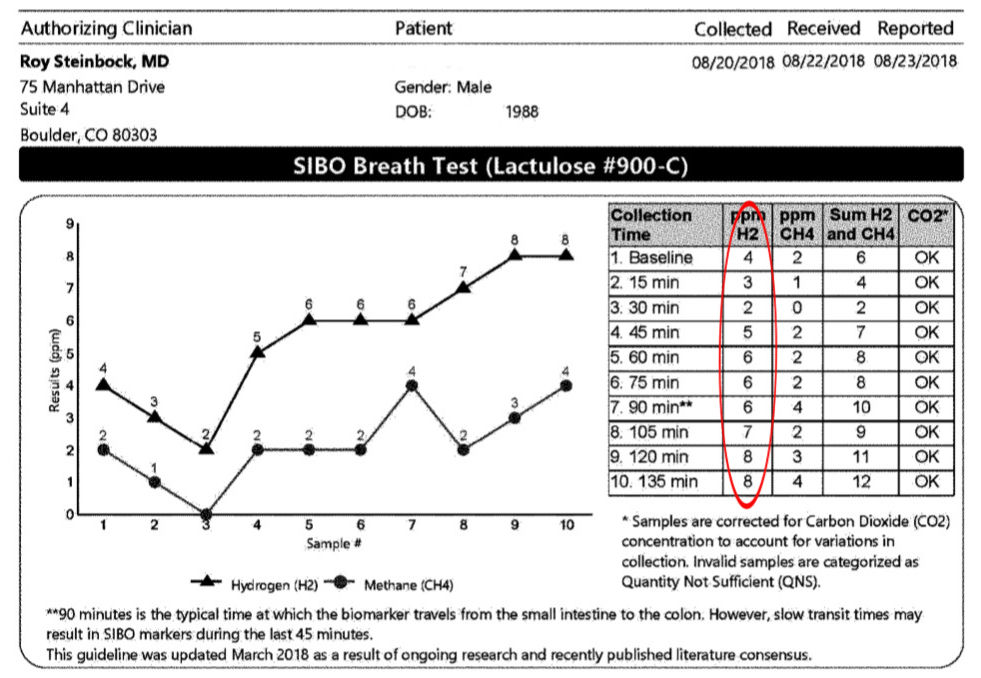 This client presented with a long GI history (amongst other conditions) and her testing showed very elevated hydrogen gas levels at 45, 60, 75 and 90 minutes (31 – 100 ppm). Due to the many conditions she was dealing with, she decided to embark on a 2-week Elemental Diet as her first treatment. She was very motivated and eager to feel better as quickly as possible. In addition, her high gas levels would likely have required a strict diet and multiple courses of antibiotics or antimicrobial herbs to clear SIBO. 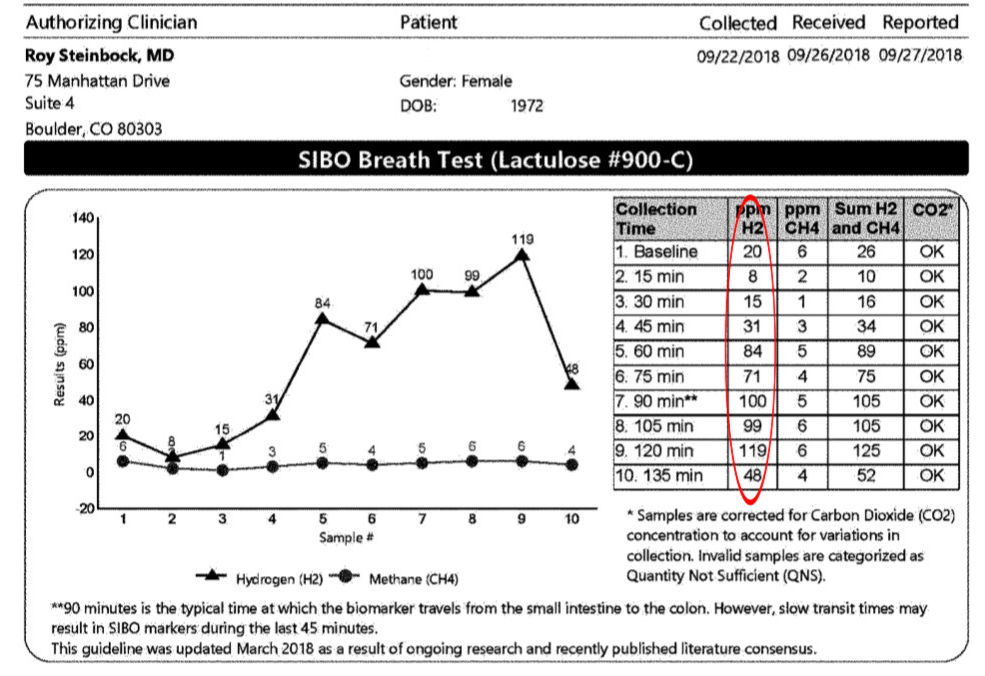 As you can see from her retest below, (done on day 15, after a 2-week Elemental Diet was completed) her gas levels are down significantly and her SIBO was eradicated! Her 45, 60, and 75 are all below the 20 ppm for SIBO to be “negative”.

Again, 90 minutes is the transition point between the small and large bowel and, although her 23 ppm at 90 minutes is slightly above the 20 ppm that we consider “negative”, the lactulose solution (taken to perform the breath test) combined with 2-weeks without solid food in her system, would both encourage a slightly faster transit time, making it likely that we are getting a reading from her large bowel by 90 minutes time.

More meaningful is that 5-month from this testing, this client reports no bloating, no GI pain, and regular bowel movements. Additionally, her skin has cleared and her musculoskeletal pain (arthritis & pain from a spinal injury) has been eliminated. 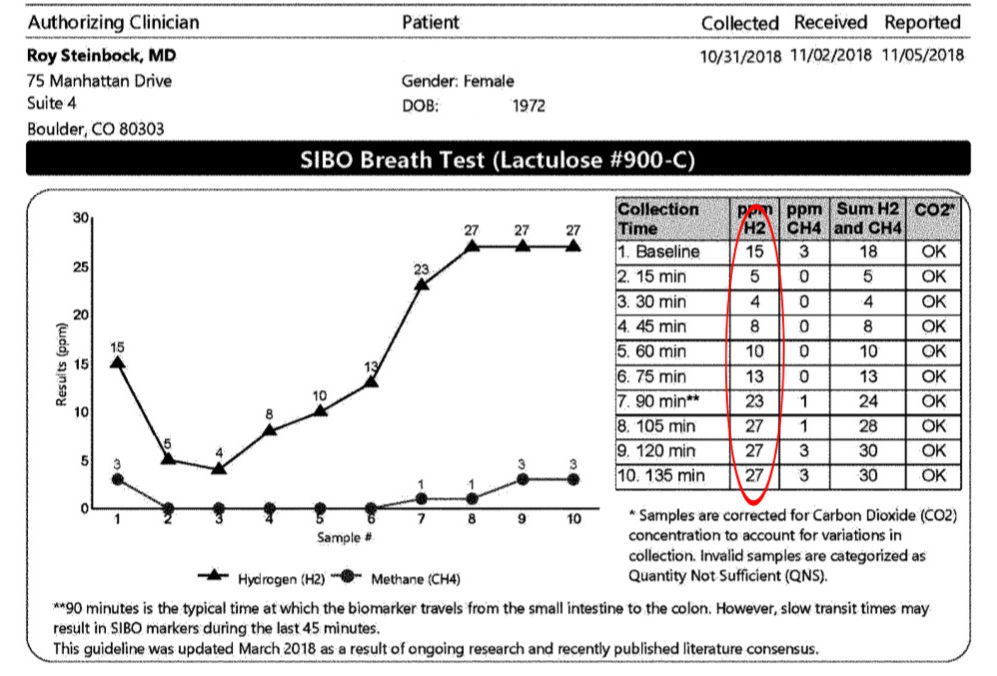 I hope this post and these case studies illustrate how SIBO can be helped by an Elemental Diet within a short time frame and with dramatic results!

You can read more on the Elemental Diet Program Page – and be sure to check out our client success stories at the bottom of that page.  Please reach out to Debbie if you have any condition that an Elemental Diet might benefit and are interested in one-on-one support.

Lastly, in my first blog post when I wrote about the Elemental Diet, I linked to several studies showing the other conditions that an Elemental Diet might help treat. Here are three additional studies that show the link between SIBO & IBS. 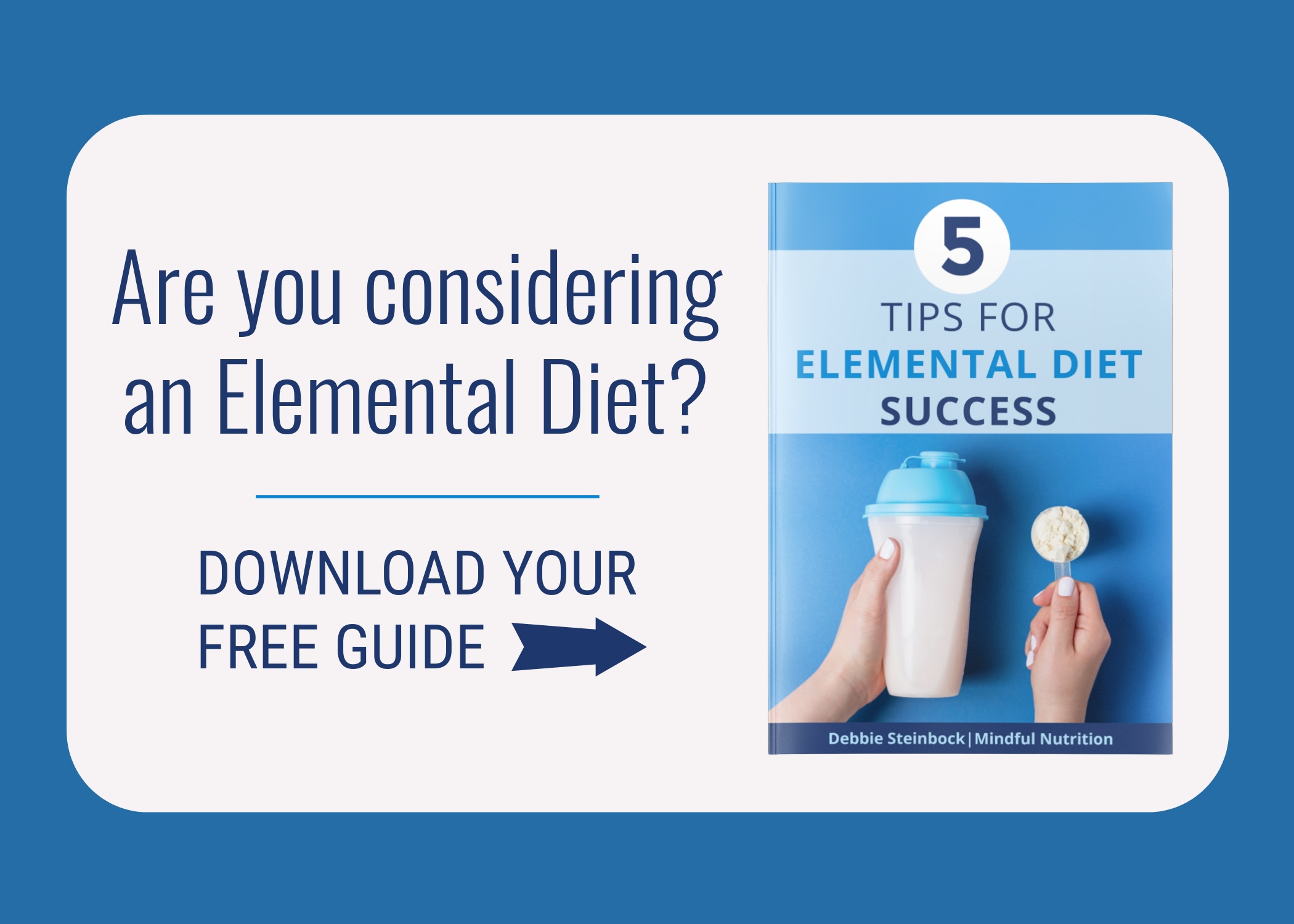