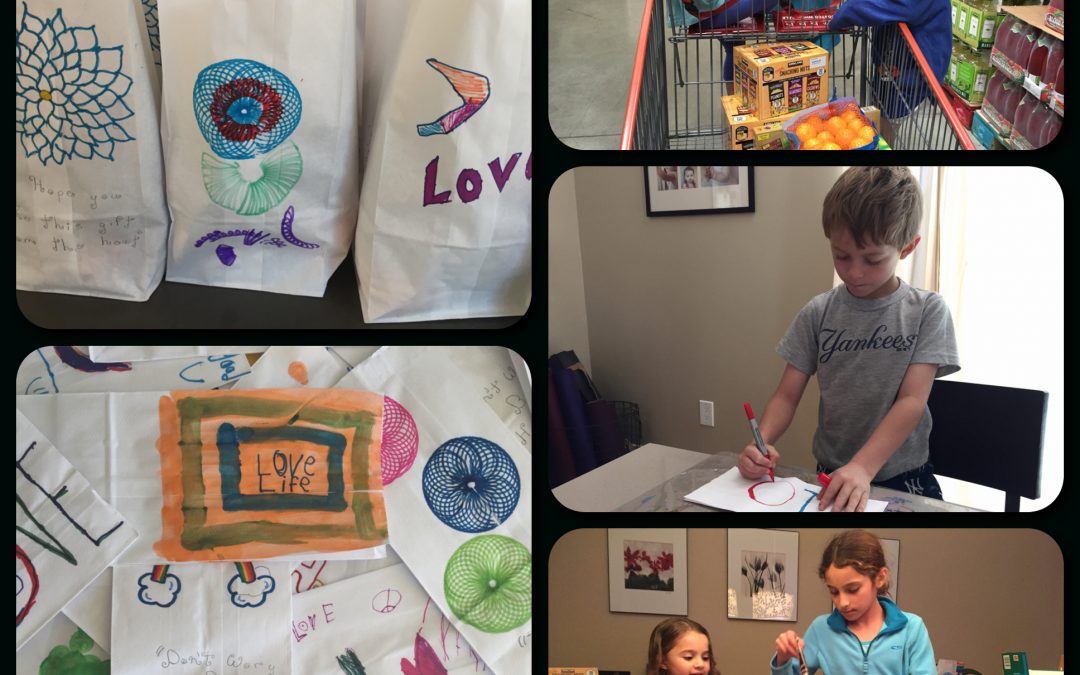 For a while now, I have wanted to do something to involve our kids in charitable work but to be honest, I didn’t really know where to start. Then a few months ago, I read a short article while sitting in a waiting room about two young girls who made bags of food for homeless people. With Thanksgiving approaching, I told the kids about what I had read and asked them if this was something they wanted to do as a family. The kids were so excited! We took them to Costco, gave them a budget, and told them that the goal was to find good tasting but also highly nutritious foods for people in need…..and then we let our kids take over from there.

Our 11-year old ran the show, using my iPhone calculator to stay within their budget and help her brother and sister figure out how many packages of each thing they would need. They brainstormed, discussed, and negotiated together.

They ended up with:

hand warmers (one that, admittedly, we would never have thought of ourselves!)

Halloween candy (our 5-yr old decided to offer hers, and yes, she accumulated that much!)

The kids came home and decorated each and every bag with their time, love, and attention.  Every bag was adorned with bright colored drawings. On some, they added thoughtful phrases such as “this is from our hearts” or “I hope this helps”—and others had just simple words such as “love” or “smile”. Then they set up an “assembly line”, dividing up what needed to go into the bags and sharing in the work.

Roy and I sat there in amazement of them. They were so happily working together as a team, exclaiming what fun they were having and how this is the best thing we ever did as a family (forget the plans to ever take them to Disney, right! 😉 ).

We ended up with just over 40 bags of food and our goal is to hand them out throughout the month of November. Our oldest did the math and discovered that for approximately $2.50 a bag, we were able to offer 40+ people a bag of nutritious food—and maybe more importantly, brighten their day just a bit.

For the past few weeks we drove around Denver and Boulder offering the food bags to those with signs saying they were in need. We saw faces light up, had our hands shaken, received many thanks….. even once by a group of random people who were passing on the street and just witnessing. The kids also learned that some people would say they didn’t want the bag, or others would take it without much show of gratitude at all…..and that was fine as well.

Our family has learned so much from this small experience. I am certain that this is the first of many times we will do this. Amongst their siblings, the kids had to budget, make decisions, and take other’s thoughts and opinions into consideration. They offered their time and creativity. They made contact with people they would not usually notice on the street or at a traffic light. And they ultimately understood that giving is the important part. How much they give of themselves is what they can control, not the reaction of others. And as a result, they really embraced the feeling of giving.

Happy Thanksgiving 2015, from our family to yours!