The Election of Trump….and How it Relates to the Chinese Farmer 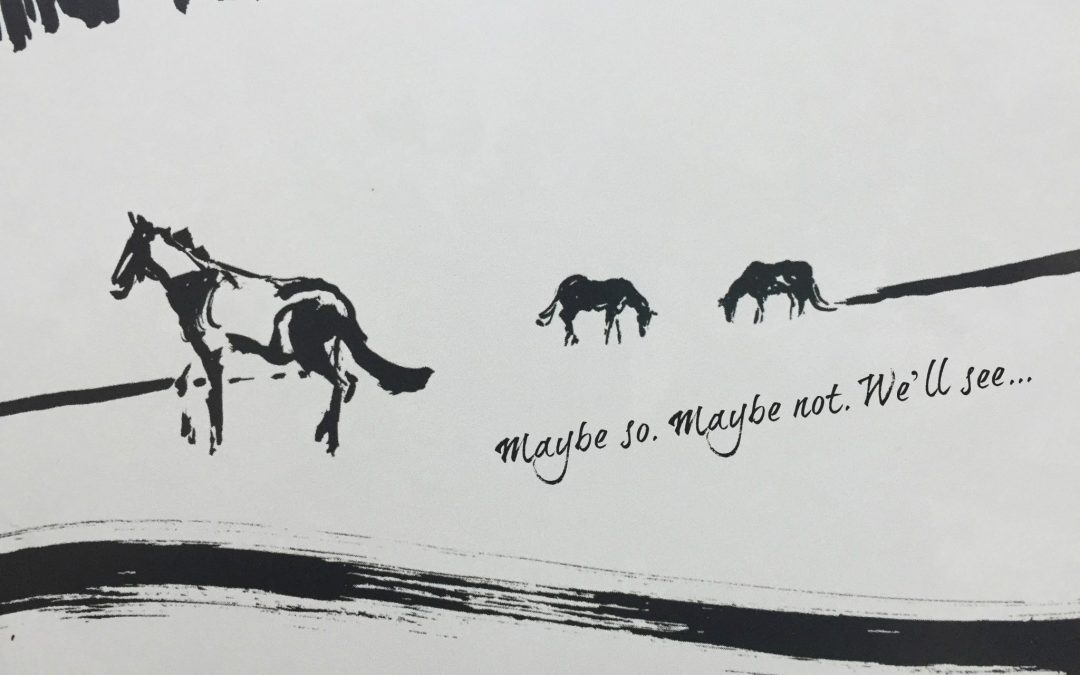 It has been less than a week since our Country has elected our next President. While I have no intention of having a political discussion, I have thought multiple times this week about a story I have read my kids many times, the story of the Chinese Farmer, and so I thought I would share it.

A farmer and his son had a beloved stallion who helped the family earn a living. One day, the horse ran away and their neighbors exclaimed, “Your horse ran away, what terrible luck!” The farmer replied, “Maybe so. Maybe not. We’ll see.”

A few days later, the horse returned home, leading a few wild mares back to the farm as well. The neighbors shouted out, “Your horse has returned, and brought several horses home with him. What great luck!” The farmer replied, “Maybe so. Maybe not. We’ll see.”

Later that week, the farmer’s son was trying to ride one of the wild mares and she threw him to the ground, breaking his leg. The villagers cried, “Your son broke his leg, what terrible luck!” The farmer replied, “Maybe so. Maybe not. We’ll see.”

A few weeks later, soldiers marched through town, drafting all the able-bodied boys for the army. They did not take the farmer’s son, who was still recovering from his injury. Friends shouted, “Your boy is spared, what tremendous luck!” To which the farmer replied, “Maybe so. Maybe not. We’ll see.”

For me, the meaning of this story is that no event, in and of itself, can truly be judged as good or bad, fortunate or unfortunate, lucky or unlucky, but that only time will reveal the whole story. It is a comforting reminder that I am often in the middle of the story, and that there is still much to unfold before me.

Back in 2008, I was engaged to be married. For various reasons, our wedding was cancelled and our relationship ended only 6-weeks before our wedding date. It was certainly not the outcome I planned or anticipated. Every worst scenario about my future was playing out in my head like a bad movie, preventing my sleep and stunting my clarity. If I judged my life at that point in my story (which I absolutely did!) it would have been horrible and unfortunate.

Fast forward to today: November of 2016. I am happily married to my true soulmate. We celebrated our 7 year anniversary a few weeks ago and have three beautiful children.  I now look back at those same events of 2008 with a completely different perspective at this point in my story—a story which is still evolving!

What I once labeled as “one of the most horrible things I could ever go through” I now see as “one of the times in my life I learned and grew the most”. That doesn’t change or discount all my sadness and pain. But those events did give me a greater perspective that I have remembered at other times in my life, such as this one, when I catch myself judging something as bad, unlucky, unfortunate, or out of my control: that I might simply see what happens next.

I’ve been through difficult medical diagnoses, been forced to deal with unexpected natural disasters, and countless heartbreaks and disappointments. Most of us have.

For much of my life I have found great comfort in having things planned, predictable, and comfortable (and I still do in many ways).  I certainly also believe in being an active participant in change, whether that is your health, the environment, politics, etc.

But I am also learning to get more comfortable with the unknown, more “friendly” with the things that do not go the way I had hoped or anticipated—allowing myself to become open to all the possibilities of what may come.